“Those who are materially, spiritually, and humanly poor are not the focus of special attention because they are an economic, social, or pastoral problem, but because the loving God, poor among the poor, reserved for them a privileged place in Christ’s life and ministry. The “poor Church for the poor”  the Church of Mercy of Pope Francis is a principle that defines in an evangelistic sense the choice of poverty and service to the poor, thus continuing the wonderful story of a loving Church that throughout the centuries has been a way to liberation, inclusion, and promotion for the poor, following Christ’s idea of liberty and love. Christ indeed offers not only generous, practical, and constant solidarity, but he also actively affirms human dignity, pursues justice, and builds a civilization that is effectively “human.”

“In this context of pastoral vision for the Church, Pope Francis’s idea of human beings in relation to society is embedded. His distinctive emphasis runs parallel to and interacts with the rest. His strong and direct speech shakes consciences to strike the “hardened” heart of a society whose culture is not open to the idea of coming together for the common good. These are the premises for a neighbourly and peaceful existence. It is not possible to move forward toward a better world until such idols as power, money, corruption, careerism, selfishness, indifference, or, to sum up, “the spirit of the world,” are demolished.“

“These concepts are clearly explained in Evangelii gaudium, which reveals to us both the bad habits that need to be abandoned and the pastoral priorities in the public life of the Church. In this effort the Pope leads the way by word and sets the pace, which quickens day by day. His aim is to let people understand that an authentic Christianity, faithful to the spirit of the Gospel, is not achievable if the people in Christian communities have a weary and half-asleep faith, without any thrill of excitement, a faith shut up within the walls of their hearts or church buildings. This is the danger that might materialize if the Church grows old and accustomed to caring only about itself rather than flinging open its doors and facing the challenges of the world. It doesn’t matter if the Church sometimes fails on the way. This is why Pope Francis keeps sending out warnings that heavy-handedness, intransigence, hypocrisy, and other shortcomings need to be abolished because they undermine Christian credibility. He is determined to reform and renew the Church so that it becomes better equipped to pursue its goals, with all that that involves.”

“In short, the life of the Church needs to be cleansed, renewed, and revitalized. This requires an ecclesial and pastoral discernment that enables the Church to rediscover the essence of its missionary mandate, in the light of the Holy Spirit and with the intercession of Mary, mother of the task of proclaiming the Gospel.“

As we start Stage 3 of Hope in the Future let us hope that we are now well on that journey of discernment.

[Catholics tend to see Catholic Social Teaching as an optional extra.  These quotes from a recent audience with the Pope are useful reminders about the key place charity has in our Faith]

Today I would like to pause to reflect briefly with you on three key words: charity, integral development and communion.

Taking up these three fundamental aspects of living in Caritas, I would like to urge you to live them with a style of poverty, gratuitousness and humility….You cannot live charity without having interpersonal relationships with the poor: living with the poor and for the poor…We must always be careful not to fall into the temptation of living a hypocritical or deceitful charity, a charity identified with almsgiving, or as a “tranquilliser” for our uneasy consciences….Charity is not an idea or a pious feeling, but is an experiential encounter with Christ; it is the desire to live with the heart of God Who does not ask us to have a generic love, affection, solidarity, etc. for the poor, but to meet Himself in them (see Mt 25: 31-46), in the style of poverty.

You can read the full text here

We are looking for willing hosts for Refugee Dine with Me which is our Parish initiative and now Diocese wide.  Forms are available at the back of each church or you click on the image and save a copy to print. 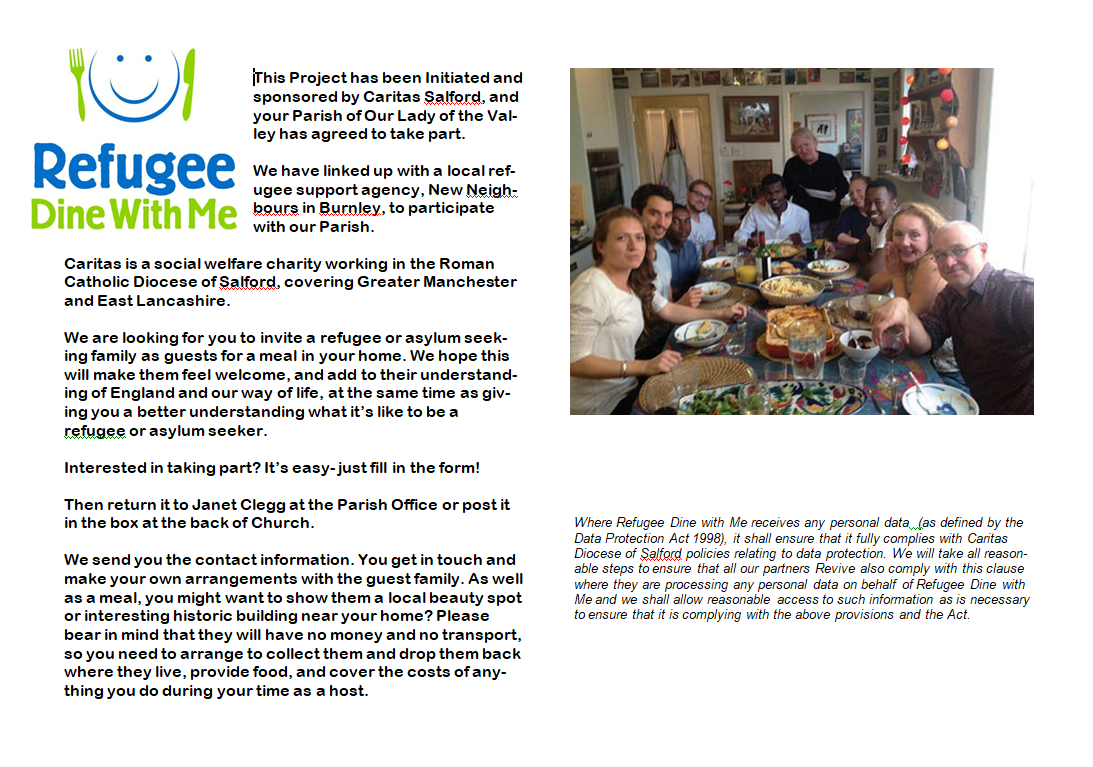 Our Parish work on refugees and human trafficking feature in the latest Caritas Refugee Response Newsletter which also has a lot of interesting material from elsewhere.

Pope Francis appeals to Catholics in England and Wales to ‘open their eyes’ and ‘hear the cry’ of human trafficking victims.

Day for Life is the day in the Church’s year dedicated to raising awareness about the meaning and value of human life at every stage and in every condition. This year’s Day for Life aims to raise awareness of the vile crime of human trafficking.

It is a tribute to the work of our Laudato Si’ Team that we are now registered for the Live Simply Award.  All we have to do now is put our plan into action!

Our next talk, Bird and Bats and Everything to do with the Environment,  is on Wednesday 13 June (see Events). 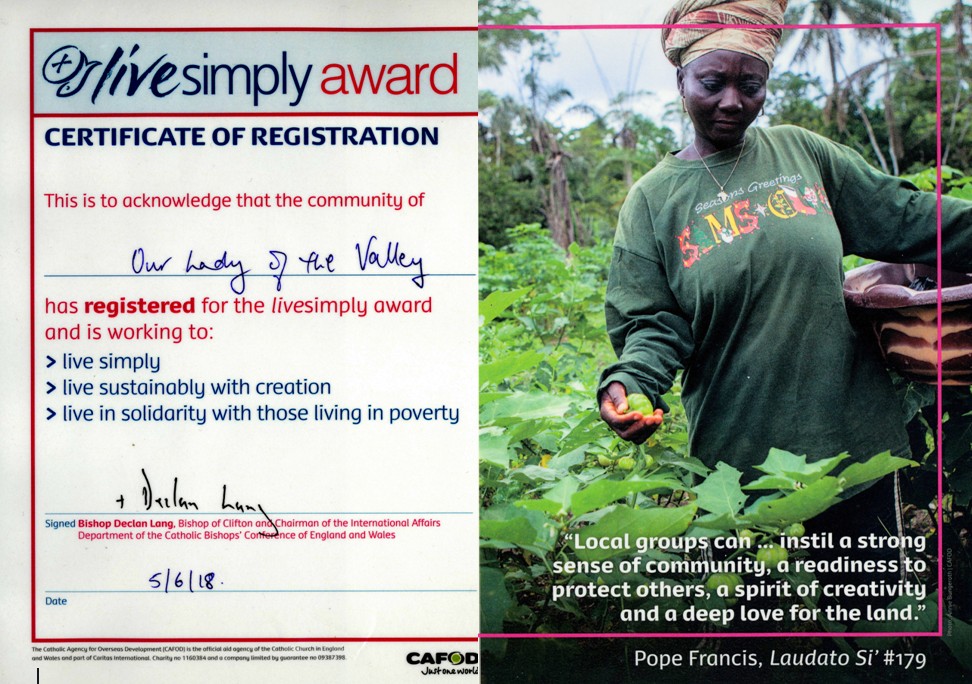 The Irish Referendum on abortion was a blow to our pro-life aspirations but do the people who voted realise where that result might lead us?  An inspirational story on BBC2’s Victoria Derbyshire programme on Tuesday this week follows the publication of a book by Melissa Ohden – a woman who survived an abortion in the US.  In 1977 her 19 year old, 8 month pregnant,  mother was given a saline infusion abortion which would normally kill the baby in 5 days.  Melissa was born barely alive and effectively discarded in toxic waste but rescued by a nurse who heard slight noises.  Whilst her story outlines how babies were killed in the womb in the US in 1977 (they use different methods these days), and what happened when they were born alive, the story is actually an uplifting one.  It is about how Melissa survived against the odds and became a healthy, successful woman.  It is also about the relationship she now has with her birth mother who had never wanted the abortion in the first place.

But as David Alton says:  Love them both holds the key to making progress. This must always mean contesting the idea that a loving response can ever involve ending another’s life. Providing practical alternatives must always accompany efforts to challenge laws and attitudes.

You can see the full story on youtube, Testimony of Melissa Ohden, abortion survivor

A report in the Limerick Leader about a letter written by the Catholic Bishop of Limerick in regards the Referendum result that will lead to change the 8th amendment of the Irish Constitution.

SOCIETY has been “very much divided” by the referendum on whether to repeal or retain the eighth amendment, the Bishop of Limerick believes.

Limerick City and County voted by a significant majority to repeal the eighth amendment in Friday’s referendum.

In a message read out at Masses across the Limerick diocese this Sunday, Bishop Brendan Leahy described the result of the referendum as “deeply regrettable and chilling” for those who voted no.

In his message, the Bishop also acknowledged that each person’s political position on the matter was “ultimately borne out of care.”

“Those who voted no did so with compassion particularly for the unborn child,” Bishop Leahy said.

“Those who voted yes did so with an eye particularly on the mother carrying that child.”

“We have unquestionably been divided in many respects as a society over recent years by pivotal political decisions but we must begin to heal and to remember that we are one, not two societies,” Bishop Leahy said.

The stories of many women who terminated their pregnancies were heard during the debate, he added.

“They were women in crisis pregnancies or women in dreadful circumstances; victims of sexual violence or those who have been given dreadful news regarding the viability of the baby in the womb, a baby they dearly want, or women whose lives are put at risk by an imminent childbirth.”

“While the Church’s position is that life, in or out, of the womb is to be protected, it is only right that we have heard these stories and got a sense of women’s immense pain and distress.”

“So often, women were left on their own at that time, perhaps with the support only of a friend, perhaps immediate family but not much else.”

“A message we can take, therefore, from the stories we’ve heard is that we have ultimately failed them as a society if we allow them to be isolated.”

“We need to engender more coherently a society of care, a society of support so that the default for women in these circumstances is to turn to that society and know that it wraps them in a blanket of love and support.”

“The Church treasures life above all else and that extends to life in the womb,” Bishop Leahy added.

“Even before the Referendum, it was a core value and it will remain so.”

“The result, in that context, is deeply regrettable and chilling for those of us who voted no.”

“The final result of the Referendum is the will of the majority of the people, though not all the people.”

The vote does not change the Church’s position on that matter, he added.

Samara Aid Appeal is the charity we used to get the last batch of knitted blankets and things to those in desperate need in Syria.  Samara ask for our prayers as an alternative to more violence.  Click on the image to take you to our webpage and get the full letter from them. 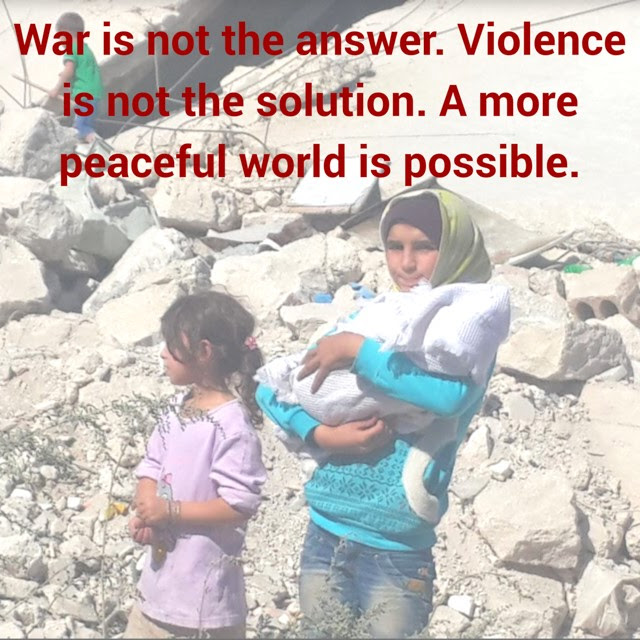 Senior law enforcement officers, Bishops, religious women and key international organisations met together last week for the fifth Santa Marta Group conference in the Vatican to update and share best practise in the fight against human trafficking and modern slavery.

At this year’s conference over 30 countries were represented, including delegates from Africa, Europe, Asia Pacific, North and South America. The conference had a regional focus enabling delegates to share tailored solutions to human trafficking within their geographical context.  They discussed the challenges they face and showcase the collaborative work the Church and law enforcement is doing to eradicate human trafficking.

Cardinal Vincent Nichols, president of the Santa Marta Group was a speaker alongside other Church leaders.  The conference ended with a Papal Audience on Friday.

This year the conference coincided with the feast day of St Josephine Bakhita, patron saint of human trafficking and who herself was a survivor of slavery.  Cardinal Pietro Parolin will celebrate the feast with a mass in St Peter’s Basilica.

Launched in 2014 by Pope Francis and led by Cardinal Vincent Nichols the Santa Marta Group is a unique global partnership between law enforcement and the Catholic Church. Since 2014 the group has grown to become a worldwide network covering 35 countries.

“Slavery continues to affect the most vulnerable in our communities and the latest UN figures suggests over forty million people are now potential victims. This year’s conference hopes to build on the hard work produced by SMG partners since the group was established in 2014.The conference is an opportunity for law enforcement and the Church to share evidence of practical cooperation and effective responses driven by the importance of supporting survivors of human trafficking.

“Slavery is an affront to human dignity and we all have a responsibility to fight against it. This conference is a unique opportunity to strengthen our global response as we move to specific and accountable actions.”

For more information go to http://santamartagroup.com/