Attached is some of the work, if you would like to put it on the webpage.

The junior children at Thorneyholme RC Primary School had several lessons on Human Trafficking in June 2017.
They began their learning with St Bakhita who was kidnapped and experienced suffering when she was sold into slavery.
Children went on to watch a video about Child Slavery in the Chocolate Industry and made a big group poster about the story of a child (see photograph).

We look at Human Trafficking as it arises from the news and children write comments about it. (see photograph) 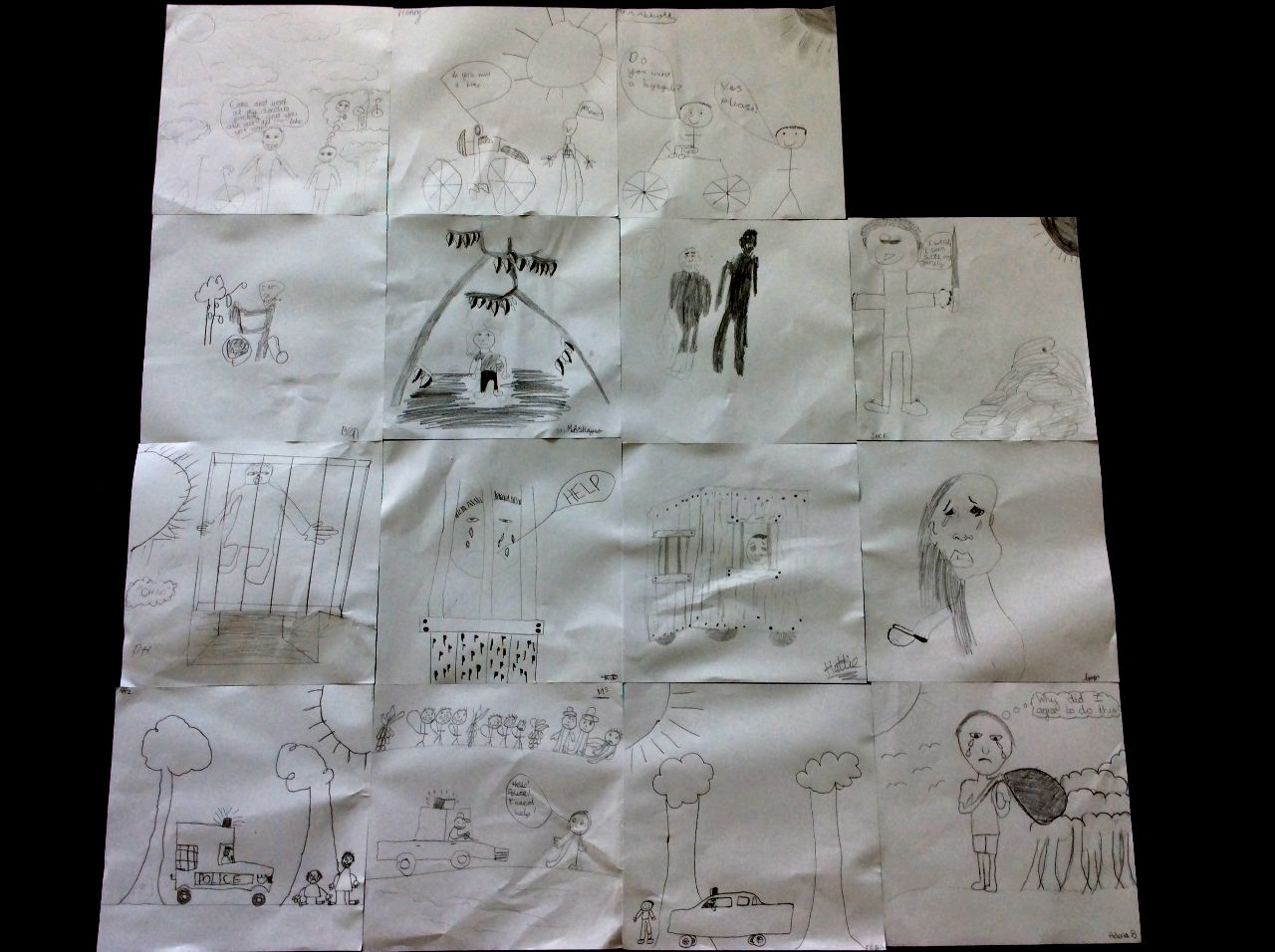 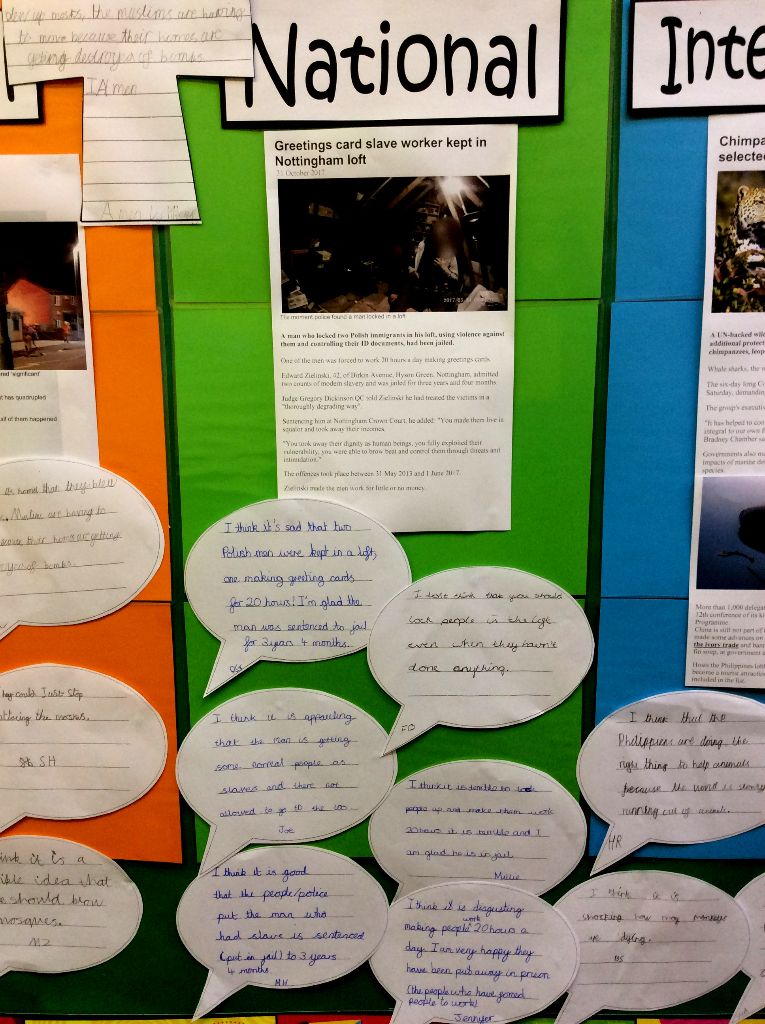 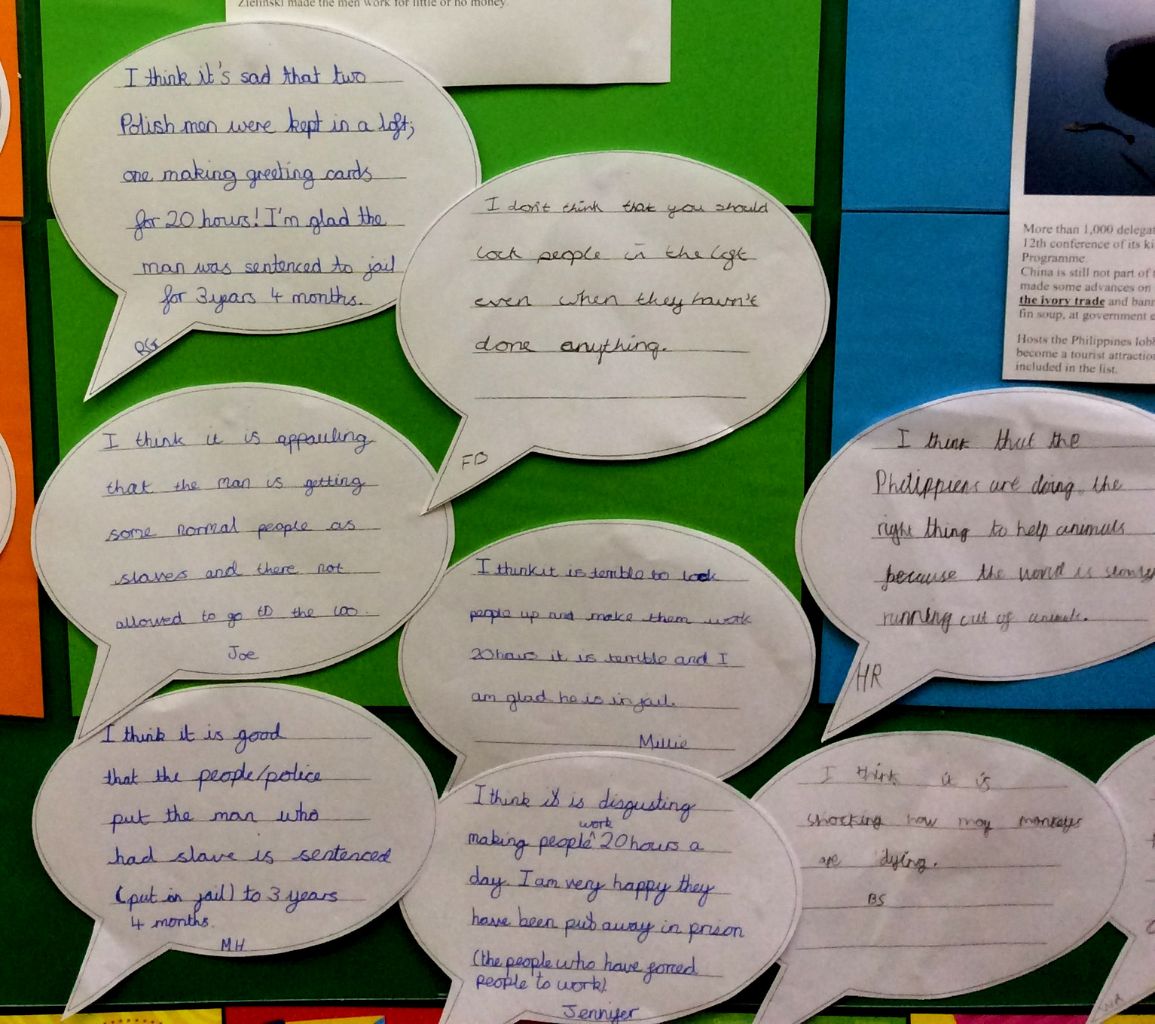 May 8 2017:  Human Trafficking and primary schools

On May 8 we met Olga Jackson, Deputy Head at Thorneyholme Primary School, Dunsop Bridge.  Olga contacted us after looking at our webpage and discovering Martin Connolly’s  input on modern day slavery at St Michael and St John’s Primary School when the Holy Door came to Clitheroe during the Year of Mercy.  Martin used Salvation Army material, since supplemented with worksheets which weren’t available at the time.  We offered Olga the Salvation Army material plus material from Stop the Traffik all of which is eminently suitable for young children and comprises short lessons for assembly and as well as longer lesson plans.  Olga believes that awareness of human trafficking and modern day slavery should start at an early stage.

Most interestingly, we discovered that the Santa Marta Group, Review of Progress 2016 includes a report on Westminster Diocese’s use of Just Enough  to deliver primary school lessons.  Following this up with Just Enough we learned that they have delivered a tailored package of lessons to 20 Catholic schools in Westminster Diocese.  Moreover, in a Home Office initiative, Healthy Schools targeted primary schools in Greater Manchester and sixteen responded including three Catholic schools.  Just Enough are delivering these lessons between 17 May and 18 July at a cost of £200 for a half day of one or two sessions, or £290 for a full day of between three and four sessions.   We will be taking up the offer to observe one of these sessions.

The Just Enough material is also available on line to schools at a cost of £30 per year.  On the face of it, a Santa Marta Group recommended offering is not only the obvious option to take but its uptake so far in Greater Manchester greatly strengthens the case for us to promote the case, via our new relationship between SMG and Caritas Anti-Trafficking,  for the widespread use of the materials generally throughout the Catholic Diocese of Salford.