“Cor ad cor loquitur”, (Heart speaks to heart) is the motto that was taken by Cardinal Newman on his appointment as a Cardinal by Pope Leo X111 in 1879.

On Sunday 13 October 2019 Cardinal Newman was canonised as a saint in St Peter’s Square in Rome.  The parish of Our Lady of the Valley was informally represented by the Spencer’s and the Wallace’s.  The pilgrimage started at Chiesa Nuova, the site of St Philip Neri’s first oratory, which was the base for the organisation of the British contingent.

Twenty thousand seats were laid out in st Peter’s Square and large TV monitors located down the length of the Via della Conciliazione to the Tiber.  The Mass started at 10am with the security gates opening at 7am to process everyone through.  The skies were absolutely blue and the southern façade of the square provided some shade from the sun in the hours leading up to the Eucharistic Celebration of the Canonisation.

The Mass began with the canonisation.  In addition to St John Henry, four other saints were canonised, St Giuseppina from Rome, St Miriam Thresia from India, St Dulce from Brazil, and St Marguerite from the canton of Fribourg.  Many pilgrims had made their way to Rome and the Brazilians and Indians were well represented by a sea of flags.  The Mass started with a short summary of each saints’ life and work.  Cardinal Giovanni Angelo Becciu then made the petition “Beatissimo Padre, la Santa Madre Chiesa chiede che Bostra Santita iscriva I Beati”, (the Holy Mother Church beseeches your Holiness to enrol blessed…..)

Pope Francis then responded declaring them saints “e li scriviamo nell’Albo dei Santi”, (and we enrol them among the saints).  Cardinal Becciu then replied, concluding with the words “Lo ordiniamo”, (we so decree).

There then followed the most incredible organisation as Holy Communion was distributed to the 20,000 seated congregation and beyond.  The crowds extended down to the Tiber and must have exceeded 200,000.  The final hymn of the Mass was ‘Lead kindly light’, written by St John Henry, and a fitting conclusion.  After Mass, Pope Francis was able to drive along the pre-formed alleys to the bottom of St Peter’s Square.

The following day there was a Mass of Thanksgiving with Cardinal Vincent Nichols at the Basilica di San Giovanni in Laterano, which in his final words “brought the party to a conclusion”.  There was another connection with Clitheroe at the end of the Mass when I met with Fr Rod Strange, author of a number of works on St Henry including ‘A Mind Alive’, a former pupil of Stonyhurst and friend of parishioner, David Clews. 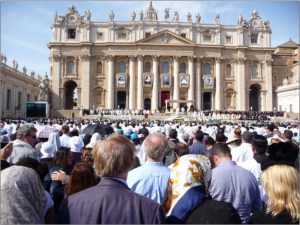 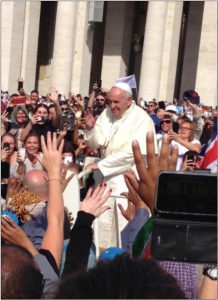